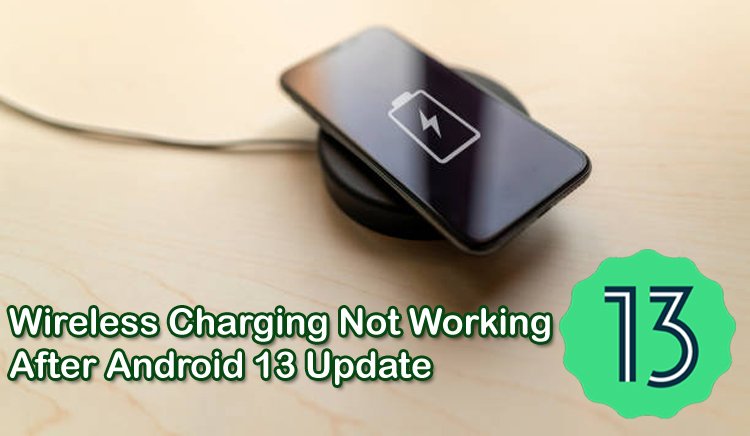 Many smartphone users like to charge their smartphone wirelessly, but after updating their device to Android 13, they can’t do it. I have seen this issue to be encountered by many people.

If you have also updated your device to Android 13 and facing the same problem then you don’t need to worry. In this troubleshooting guide, we will share some effective solutions to solve wireless charging not working after Android 13 update.

But as I said that many users are facing this problem, let us just first check one practical user scenario.

problem with wireless charging since Android 13

Do many of you have issue with wireless charging since Android 13. I have this issue since Beta 4 and still available in stable verison.

I have already tried to disable adaptive charging or intelligent charging, but with no improvement.

After a period of time it stopped charging. A restart of the phone solve the issue.

I use Pixel stand 1gen and 2nd gen. On both the same behavior. I also see this issue on Pixel 4 XL and Pixel 6 Pro both on Beta 4 and now on stable version.

works fine for a period of time.

Fix Wireless Charging Not Working On Android After Android 13 Update

There are different ways that you can apply to fix Android 13 charging wireless issue. You can follow them one by one.

The Adaptive Charging feature will keep your phone’s battery charged up to maximum 80% throughout the night if you keep it plugged in all overnight. And according to your wake up alarm it will complete the charging process so that you will get a fully charged mobile.

However, this feature seems to conflict with wireless charging. Therefore, you should disable this feature.

Below, learn the steps to turn off this feature:

After this, check if the issue is solved or still you are unable to charge your phone wirelessly.

It is always suggested to use the original adapter and cable. You can use the cable that came with the wireless charger box. If it is not, then you can purchase a new set.

So, to confirm it you can boot your Android mobile into safe mode. When your phone is in safe mode then all the third-party apps get disabled. Now, you can plug your handset into charging. If it is working and getting charged then it means that third-party app is causing the problem.

To fix this issue, you need to uninstall the recently installed apps one after another after checking the issue is solved or not.

It might be possible that the charger has not had any problem but your phone is charging slowly and remain at the same battery percentage.

Some smartphones allow you to turn on fast wireless charging manually. Hence, you should check it on your mobile and enable it.

Here we have provided the steps to toggle on Fast Wireless charging on Samsung phones and the same will be working on other phones (only you can see some changes in options).

As you know that for wireless charging the coils of the mobile and charger pad need to place on the top of each other without any object in middle.

Hence, if you are using a hard or thick phone case then you should remove it and then try. If the phone is charging fine then buy a thinner phone protector.

If you are facing this issue on Google Pixel phone then follow the below methods to fix it.

Sometimes, the old cache files might get corrupted and cause issues. You can clear the cache and data of Pixel Stand application and then open the app, it will then populate the fresh and stores new cache files.

Below, learn how to do this:

Another possible fix to solve this issue is by rolling back to Android 12 from 13. You can easily do it by using Google’s Android Flash tool.

For this, you need to connect your Pixel phone to your computer and keep it connect till the end. If you disconnect your phone during the process then it could corrupt your software.

Note: You can only downgrade Google Pixel 5 and Pixel 4 to Android 12 and after downgrading you can’t enjoy all the new features.

Below, learn how to downgrade to the previous version:

Step 1: First, with the help of USB cable connect your Google Pixel phone to your computer.

Step 3: Hit on Flash button to download the needed version.

Step 5: Next, you will get a debugging notification on your phone. Hit on Allow to allow the debugging access.

Step 6: Before you go further, refresh the Selected Device section to make sure your phone is connected properly. Also, confirm the selected built version.

Step 7: Hit on edit icon beside the Selected built to modify the built settings. Ensure to trick the Wipe Device option. Expand the Advanced Options and tick the Force Flash all Partitions option if it is not chosen by default.

Step 8: Once you set all the configurations, hit on Install built button.

Step 9: After this, a confirmation dialog box will appear. Before you confirm it, you should go through all the selected options. When you hit on Confirm, you will not get any option to undo it. Once you confirm, click on Confirm button.

Step 10: The flashing tool will start flashing on your mobile. During the process, your mobile will boot to FastbootS and Fastboot modes.

Step 11: When the above steps get completed, you will get a pop-up message to reboot your smartphone. Disconnect your phone and allow it to reboot.

That’s It! Your Pixel phone has rolled back to a lower version.

Let us look at some more tips to fix the same issue.

These are additional tips that you can follow to fix the issue, if none of the above solutions work for you.

1. Turn off the hidden Pixel stand app in the app settings.

2. Unpair and then re-pair the Pixel stand and then force a hard reboot.

Also Read: How To Stop Phone From Overheating While Charging

Question 1. Why Your Android Phone Not Charging On Your Wireless Charger?

There could be multiple reasons behind it. However, some of the major reasons are as follows:

Question 2. How Do You Enable Wireless Charging Mode?

You can easily turn on wireless charging mode on a Galaxy device. To do this, you need to plug the wireless charger’s power adapter into a power source and USB connector into the wireless charger. When you first connect the cable then you will see a flash-in indicator light on the base. Once you are ready, keep your mobile on it.

So, you can say that the Pixel phone that is updated and running on Android 13 experiencing this issue.

We used to update our device to the latest version to enjoy all new features and fix bugs. However, sometimes the latest OS update brings bugs, and due to this users need to face many issues on their handset.

Among all these, wireless charging not working issue after Android 13 update is also one of them. But now no more, as the above methods will surely help you to solve the issue.

I hope you found this article useful and enjoyed reading it.