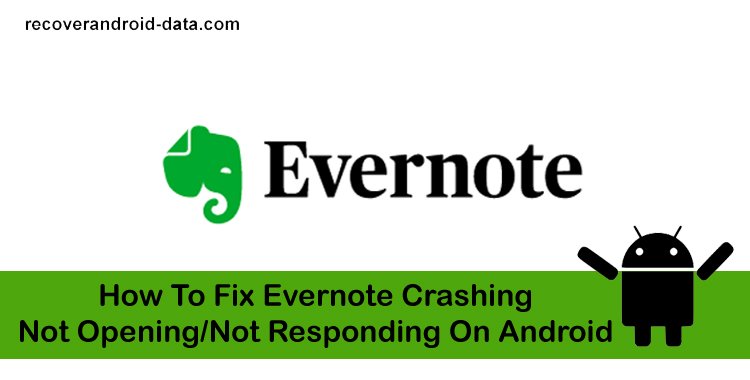 Follow The Different Solutions Mentioned In This Guide To Fix Evernote Not Opening, Crashing, or Not Responding Issues On Android Phone Or Tablet!

Evernote is a famous note-making, organizing, task management, and archiving app. You can use it to make notes in the form of video, audio, drawing, text, and photographs.

Though the app is very easy to use and works fine, but sometimes you may face some problems in this app like not responding, crashing, or not opening. When you face any of these issues on Evernote app then you need to apply some solutions to fix them.

So, this article is here to deal with this issue. In this troubleshooting guide, you will find multiple fixes for Evernote not opening/crashing/not responding on Android.

Expert Tip: One of the easy and reliable ways to fix Evernote crashing, not opening or not responding issues on Android is by using Android Repair software.

With the help of Android System Repair tool, you can effectively:

Why Is Evernote Not Opening/Crashing/Not Responding On Android?

There could be many reasons due to which you face these issues on Evernote app. Some of them include:

So, these are the reasons why most Android users encounter these issues on Evernote app. I hope you also encountered this problem due to any of these causes.

Whatever may be the reasons you should move ahead to the solutions to fix Evernote app not responding/crashing/not opening on Android.

Before you follow the other solutions, you should first try the simple and basic tips.

You should always try to keep Evernote or any other app updated to the latest version. So, you are suggested to check the update for Evernote – Notes Organizer app and if you find the update then install it.

Below learn how to update Evernote app on Android.

Step 1: Run the Google Play Store app on your Android phone or tablet.

Step 2: Then, tap on the search box at the top of the screen. Here, enter the name of the app.

Also Read: How To Solve Mobile Network Not Available On Android

Sometimes the app server goes down and due to this Evernote starts crashing or showing other issues. Hence, you should confirm that whether this problem is caused due to server problem or not. If it is a server issue then you can’t do anything from yourself. You need to just wait until the server is up.

To check the live status of Evernote app you can visit the Downdetector website. If it is down then just wait until it gets fixed. And if the status of the app is good then it means that there is some other problem that is responsible for Evernote not opening problem.

When you clear the cache and data of the app then the app is restored to its default settings and clear all the cache files which helps to solve the problem with the app.

Note: Clearing the data of Evernote app may clear all the notes that you have made earlier.

However, follow the below steps to clear cache and data of Evernote app.

Step 2: Then hit on Apps/Application manager.

Step 3: Now, you will get a list of all installed apps. From there, choose Evernote app and hit on it.

Step 5: After this, tap on Clear Cache and Clear Data button.

Now, open the Evernote app again and check whether the problem is solved or not. If not then move to the next solution.

Any unsynced notes (notes that are marked by red corners) and pictures get erased when you reinstall Evernote app. So, if you wish to save any unsynced images then hit on 3 dots/Menu button and choose Save to Downloads.

Now, follow the below steps to do the same.

Step 1: Run the Google Play Store app on your smartphone.

Step 2: Then enter the name of the app in the search bar and then hit on Uninstall.

Step 3: Restart your mobile and then reinstall it from Google Play Store.

It may be possible that the issue you are facing right now is causing due to some problem in your Android OS. If this is the case then you are recommended to try Android System Repair tool to solve Evernote not responding, crashing or not opening on Android tablet or phone.

One thing you have to keep in your mind is that Android Repair software only works on Samsung tablets and Samsung phones.

So, if you are using other brands of Android phones other than Samsung then you need to skip this method.

If you are unable to fix the issue by following the above solutions then you should contact the Evernote support team by visiting Evernote website. You can also send them an email regarding the problem.

Today making notes is very helpful to keep important things remembered. Many users use Evernote – Note Organizer app for making notes. But sometimes users face many issues with this app. But, I hope the above solutions will help you to fix Evernote crashing/not opening/not responding on Android.

If the error is occurring due to some problem in your Android Operating System then you are highly recommended to try Android Repair tool to resolve the issue.