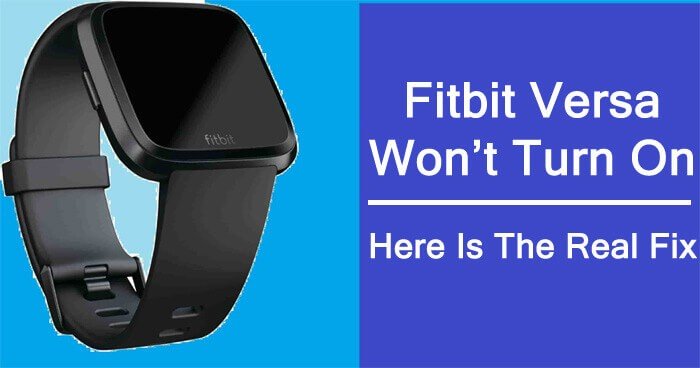 Find Out Easy Methods On How To Fix Fitbit Versa Won’t Turn On!

Though, these are some of the common reasons behind the issue.

Also Read: How To Fix Front Camera Not Working On Android

Now, let us see a real-user practical scenario below!

Last night I left it charging because the app was showing battery low and today I am trying to turn it on and nothing is happening. Anybody is facing the same problem?

Now, the question is – What do you do if your Fitbit versa won’t turn on?

Well, you don’t have to worry. Below I have discussed easy methods on how to turn on Fitbit Versa after shout down or how to fix Fitbit Versa won’t turn on.

If your Fitbit Versa battery is low then this can cause Fitbit Versa turns on and off issue. The battery of Fitbit Versa is of Lithium-polymer that can run 4 days without charging.

Some users also forget to charge their Versa again.

When battery become old then it doesn’t have much juice to run the gadget. So, in this case you should change the battery and then see if issue is solved or not.

When you charge your Fitbit Versa make sure that it has little amount of battery on it in order to continue the charging process. If your device battery is empty then it will not take charge.

For More Details Information, Please Check Out – How to Charge Your Fitbit

You can check the current charger by charging another Fitbit Versa if you or your friends have. If it is not charging well then you should buy a new charger.

For More Details Information, Please Check Out – How do I charge my Fitbit device?

Your Fitbit can also contains bugs due to lots of reasons. So, you should restart your Versa to remove the bugs and fix Fitbit Versa 2 won’t turn on.

To restart/shutdown Fitbit Versa, Fitbit Blaze and Fitbit lonic you need to press and hold the back + bottom buttons until the Fitbit logo appears on the screen.

To restart Fitbit Versa 2 and Fitbit Versa Lite Edition, you need to press and hold the back button for 10+ seconds until the Fitbit logo appears on the screen.

If this do not solve the issue then try the next method.

For More Details Information, Please Check Out – How do I restart my Fitbit device?

Sometimes while using Fitbit watch in dirty areas then some dust or dirt enters in the charging port which may also cause you Fitbit Versa powering on and off issue. So, you should clean the port with the help of cotton swab or dense air and see the problem is resolved or not.

For More Details Information, Please Check Out – How do I clean my Fitbit device?

If the above methods don’t help you to solve Fitbit Versa won’t turn on then you should factory reset your watch. But factory reset will wipe all the saved data from your gadget. So, if you have synced you data with Fitbit account then it is safe.

Follow the below steps to factory reset Fitbit Versa.

Step 1: On your Fitbit Versa, press and hold the three buttons for 12 seconds. This will show the 2-button hardware reboot after about 8 seconds.

Step 2: Next, Fitbit logo display and it disappears then release the bottom right button but don’t release the left and top right buttons until it vibrates. Vibration shows that the factory reset process is started.

Step 3: The whole process will take many seconds and after that Fitbit logo display and the gadget boots and displays go to Fitbit.com/setup.

Step 4: If you fail to release the bottom right button or if it don’t follow the process then the Fitbit logo reappear and boots without factory reset.

For More Details Information, Please Check Out – How to Reset Your Fitbit

If your Fitbit Versa won’t turn on after factory reset then it may be a hardware problem. In this situation you should contact Fitbit support centre and take help from them to fix this. To contact Fitbit visit – Fitbit Support

Sometimes Fitbit Versa not turn on or stop working after swimming. Versa come with water resistance to fifty meters. If your Versa dips into water then you should dry it as the watch should be clean and dry all the times. Make sure to put out your watch when you are in a hot tub. If you watch is on warranty period and the problem is not solved then replace it right now.

To turn on Fitbit Versa inspire, follow the below steps.

Step 1: Connect your computer with the USB cable or any UL-certified USB wall charger.

Step 2: Hold the other end of the USB cable just near the port on the back of the watch unless it gets attached magnetically.

Step 3: After that press and hold button on your tracker for five seconds.

Step 4: After 5 seconds release the button.

3. How do I fix my Fitbit Versa black screen?

If your watch’s screen turns black and not responding then try to restart your Fitbit Versa may this can fix the problem.

Follow the below steps to restart your Fitbit Versa.

Step 1: Press and hold the both Back and Bottom buttons until you see Fitbit logo on the screen.

4. How do I force restart my Versa Fitbit?

Here are the steps to force restart Fitbit Versa.

Step 1: Press and hold together Back and Bottom right buttons for few seconds until Fitbit logo appears on the screen.

Step 3: Now, you need to wait until your device vibrates that will show reboot is done perfectly.

It is true that every device which you use in your daily life including Fitbit Versa will suffers from many problems and not work properly. But it doesn’t mean it can’t be fixed.